On Saturday, after nearly three weeks without a new bird for the NMT list, I added two species to the list.

The second one was, on the face of it more exciting, as it was a properly rare bird and a ‘lifer’ for me - meaning that I haven’t seen it anywhere in the world before. It was an Arctic Warbler that had apparently been at Hartlepool Headland since the 6th of October and over the last few days had started being seen regularly by large numbers of birders. The Arctic Warbler is a small, mostly green and white bird which looks quite similar to our Chiff-chaff and Willow Warbler, to which it is closely related, but unlike them has a long creamy-yellow stripe above the eye (the technical term for this is the supercilium) and a faint yellowish bar on the wing. It is also slightly bigger with a stouter bill. Arctic Warblers breed in northern birch forests, usually near water, across a vast area reaching from northern Scandinavia going east as far as western Alaska, and the whole population spends the winter in South-east Asia. If you look at a map you will see that one turning up on migration in Hartlepool is a bit lost - it should be a lot further east by now.

This one was in the sycamore trees just in front of the Borough Hall on Hartlepool Headland and being small and very mobile was not always easy to see. When I got there it had been seen about 15 minutes before and it took a couple of hours of waiting and searching by a scattered flock of fifty or more birders before it was refound  and gave great, although neck-breaking, views to most of the gathered crowd. This photo was taken by my friend Dave Barlow, the day before I was there, and is used with his permission.

The other new NMT bird was a Black-throated Diver (aka an Arctic Loon to North American birders), which had been (and still is, at least up to yesterday) hanging around near the HMS Trincomalee in Hartlepool Marina. I called in there on my way to the Headland. It took a bit of finding as there were no other birders there when I arrived and I didn’t know exactly where it had been being seen. However, eventually I got very close views and was even able to get some photographs (divers are usually bobbing up and down in the waves on the sea and so are often pretty hard to photograph). Of our three regular divers in the UK, Black-throated was the one I thought I might struggle to get on the NMT list for the year but in the end it is the one that I have seen most easily. 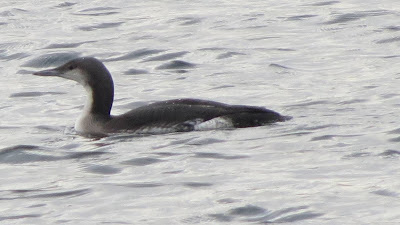 This bird is in its winter plumage and so looks, at first glance, quite similar to Red-throated and Great Northern Divers in winter. However, it is much darker than Red-throated, and without the uptilted bill, and is smaller and slimmer than a Great Northern. The white patch on the flanks, near the tail-end is often quite visible and is a useful feature for identifying a Black-throated Diver at a distance out to sea. If you want to see this bird in its beautiful summer plumage - with pearly grey head, chequered back and black throat patch - your best bet is to make a trip to northern Scotland in summer, where it breeds on small lochs in the highlands.

Posted by colintheconroy on Wednesday, October 27, 2021
Email ThisBlogThis!Share to TwitterShare to FacebookShare to Pinterest