Birding on my local patch

After dropping the car off for a service this morning I decided to walk home via my favourite little local birding 'patch' - along the lower reaches of Ormesby Beck in North Ormesby. This is a fairly unremarkable-looking little stream, with lots of the problems you might associate with urban rivers and brooks - poor water quality, large amounts of rubbish washed downstream, a straightened course running mostly in a concrete channel, development right up to the riverbanks - but even so, over the last few years I have seen or heard at least 48 species of bird along the beck and in the grassland and woods next to it (just under 10 hectares (about 24 acres) in area).

This morning my bird-list was about half that total but it included several species which are a bit special or which I don't see very often in the area. The first bird I saw when I looked over the concrete wall next to a beck-side pub (the Navigation Inn) was a Little Egret - an elegant white heron. Unfortunately I didn't have my camera with me but was able to get three rather blurry photos with my phone which still manage to give an impression of how unnatural looking the channel is at that point, with steep walls, discarded tyres and other rubbish. You can also see, from the different position of the Egret's head and neck in the three photos that it appears to be actively hunting, so there is obviously some prey, probably small fish, there for it to catch. 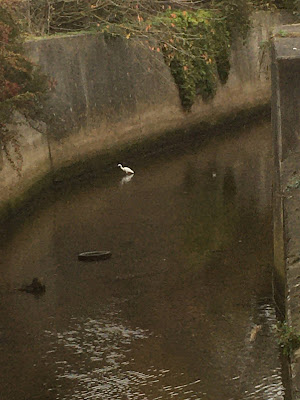 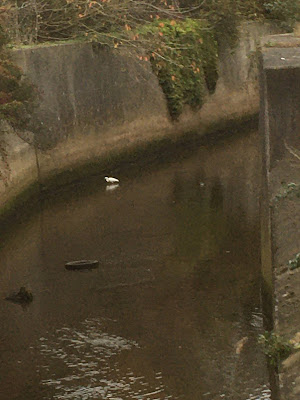 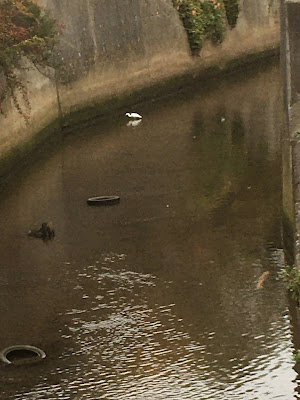 A little further down the beck from where I first saw the Egret, in a slightly more natural stretch (with vegetated banks and a little bit of tidal mud, although still in a straightened channel with lots of rubbish) I saw it again but this time flying away along with a Grey Heron and a Redshank. The Redshank, which is a fairly common wading bird in the Sandpiper family, was only the second one I have seen on my local patch and I was later able to watch it for several minutes on the mud at the point where another beck, Middle Beck, comes out of its underground culvert to join Ormesby Beck above ground.

After wandering along the beck for a while, watching an over-excited flock of Long-tailed Tits (joined at times by Blackbirds, Robins, Great Tits and Blue Tits) I came back to the mouth of Middle Beck and was really pleased to see a Grey Wagtail - the first one that I have recorded here, although I've seen them several times in North Ormesby, including in my own garden (see this blog entry from last year - http://northormesbynaturalist.blogspot.com/2019/10/the-making-of-pond-and-unexpected.html). This pretty little, long-tailed bird is often misidentified by inexperienced birders as the much scarcer Yellow Wagtail, as it has a lot of yellow in its underparts. However, as well as being an unlikely visitor to an urban stream such as this, Yellow Wagtails are summer visitors to the UK and should all be on their way to Africa by now.

The next exciting thing I spotted was a Kingfisher. Although I've seen Kingfishers on this stretch of the beck on a few occasions, it has previously always been birds flying along the river, and so I didn't have any definite evidence that they were using it as anything other than a convenient corridor to fly along between better patches of habitat. However, today was the first time that I have seen one actually diving into the beck, proving that they do linger here to hunt for the little fish that they live on.

Having seen or heard 20 species of bird along 500m of the beck channel (going downstream from the Navigation Inn, Marsh Road, North Ormesby, if you want to look at it in Google Maps), I headed towards home adding a further three species to the day's list on the way - Magpie (much vilified, very common, but nonetheless beautiful), a very fast-flying Sparrowhawk, and my first Common Teal for the patch since 2017. The Teal was a male with his lovely chestnut head and bottle green 'eye-mask' and he made a great end to an unplanned bit of patch birding.

My October article for The Tees Online has just been published (https://thetees.online/ivy-villain-or-hero/) but to make it easier for you, here is the text plus a few more photos.

What comes to mind when you think of Ivy? For many people it will bring up images of a pesky climbing weed that strangles trees, damages walls and fences and is no good for anything.

In fact Ivy, or Hedera helix to give it its scientific name, is a wonderful and unjustly vilified  plant that is great for wildlife in many different ways.

Firstly, because it flowers in autumn it is a very important source of nectar for many species of insect at a time of year when few other plants are flowering and insects would really struggle without it. Although the flowers are more inconspicuous than those of many species, being mostly  pale green and lacking petals, a small patch of ivy can have hundreds of flower heads and provides food for large numbers of bees, wasps, hoverflies, butterflies and many other insects.

Later in the winter the flowers will develop into black berries which will help birds such as Blackbirds, Woodpigeons, Redwings and Fieldfares (the last two being migratory members of the Thrush family) survive the harshest months of the year.

In the winter months, patches of ground covered in Ivy may remain frost free when nearby areas are frozen solid. This allows birds and small mammals to continue searching for food in the leaf litter during icy weather. Also, its twisting, intertwining branches and stems, and its evergreen leaves, create many niches and hollows in which birds and other animals such as Wood Mice can find shelter from severe weather. In the spring and summer many birds build their nests in ivy to raise their young.

The commonest accusation levelled against this great plant is that it strangles trees. Ivy uses trees, to give it support and allow it to reach up towards the sunlight but it is not a parasite which feeds off them (unlike another, much more popular, evergreen plant - Mistletoe), and its presence is not a sign of an unhealthy tree. However, trees don’t live forever and have a natural life cycle involving different stages. Ivy will sometimes play a role in helping an old tree move along this continuum, from the vertical to the horizontal, as it were, and may bring trees down by acting as a sail during high winds, or by holding a great weight of snow after blizzards. This still doesn’t mean that Ivy is a villain though, as dead wood is an important part of a woodland ecosystem and the toppling of trees opens up the canopy, allowing sunlight to reach the forest floor and exposing bare soil. This lets plants and animals flourish that otherwise wouldn’t be able to compete.

But surely Ivy is still bad for buildings, I hear you say. Well, a three year study carried out jointly by Oxford University and English Heritage showed that, while it could make existing damage worse, it also had a positive effect in some cases by keeping walls warmer in the winter and cooler in the summer and by protecting them from salt and airborne pollution.

The familiar lobed leaves, which give the name to several

other unrelated plants (such as Ivy-leaved Toadflax

and Ivy-leaved Speedwell) are found on young plants only.

Finally, Ivy features prominently in folklore. Bacchus, the Roman god of wine, the grape-harvest and fertility, is often depicted wreathed in Ivy as well as the more predictable grape-vines. It also symbolised intellectual prowess in ancient Rome and Ivy wreaths were given to the winners of poetry contests. It was also a symbol of fidelity and even today it is common for bridal bouquets to contain a sprig of this amazing, interesting and important evergreen plant."