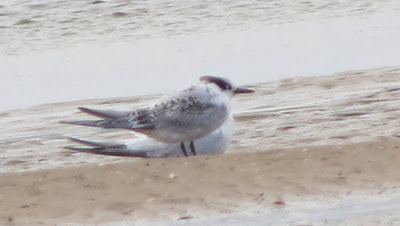 Seaton Snook is a little spit of rocks and sand dunes projecting into the north side of the River Tees just inside the river mouth. South of it is a deep channel (Seaton Channel), with the mud flats of Seal Sands on the other side of the channel. North of it is saltmarsh and the wide sandy expanse of North Gare Beach.

It is over-looked by the imposing bulk of the Hartlepool Nuclear Power Station but despite that it is a great place for birding - particularly waders, terns, skuas, divers, grebes and (in winter) Snow Buntings and Twite. For the past week or so several Arctic Skuas have been being seen regularly in the river mouth and even landing on the beach there. Large numbers of terns have also been roosting on the beach, including two species that I hadn't seen yet this year, so on Saturday I decided to cycle the 18.5km from my house (it's only 8km as the crow flies, but sadly I'm not a crow) in the hope of adding these and a few other species to my list for the year.

Although I was out of bed at 5am, I didn't leave the house until after 7 as I was checking the moth-trap which I had had running in my garden the night before (44 moths of 13 species - not a bad haul - all released unharmed of course). I went as directly as possible to Seaton Snook, stopping only briefly on Newport Bridge (3 Little Egrets in the mouth of Billingham Beck) and again at the side of the road in Saltholme and Greatham Creek (lots of birds but nothing very unusual). By the time I got to the Snook it was just after high tide and there were a few birders there already. Almost the first bird I saw was a dark shape with swept-back wings, dashing over the water just above the waves. Bingo! An Arctic Skua and number 158 for my NMT list. I was able to show it to a couple of fairly new birders who were there and we saw it, and 1 or 2 more, over the next ten minutes or so, as they chased terns, hoping to get them to drop any food they were carrying. This habit of robbing other birds of their food is called klepto-parasitism and all skuas do it, although the biggest ones, such as Great Skua (aka Bonxie) will also kill and eat birds such as Puffins and gulls. The smaller species of skua are called 'jaegers' in North America, with Arctic Skua being called Parasitic Jaeger. (For a bit more about skuas, you can read this blog I wrote back in 2018 - Sea-watching, Skuas and a fish-supper).

After the skuas apparently all went down onto the water in the river mouth (and so became almost impossible to see) I concentrated on the many waders - plovers and sandpipers - that were running, and flying, to and fro across the sand. Most abundant were Ringed Plovers and Dunlin (probably a few hundred of each) but it was really nice to see 48 Knots, many of which were still in their brick-red, summer plumage which gives them their full name of Red Knot, although it's much more common in the UK to see them in their grey winter colours.

After satisfying myself that there wasn't a Grey or Golden Plover or a Whimbrel to add to my list, I turned, with some trepidation to the large numbers of terns which were sitting on the sand a little too far away for my old scope to deal with easily. The Sandwich Terns were mostly pretty easy - at least 500 in different parts of the beach and on the Snook itself (I was actually looking from the beach) - large pale terns with dark bills and shaggy black crests. The smaller ones, however, were much trickier. Thankfully by this time there was quite a group of birders around me, one of whom had a much better scope than mine and he picked out an Arctic Tern (NMT #159), with its blood-red dagger-shaped bill distinguishing it from the Commons which have longer, thinner, more orangey bills. Later on we saw more of both species and I was able to get this photograph which shows (just about😊) those differences, along with the shorter legs and somewhat greyer underparts. 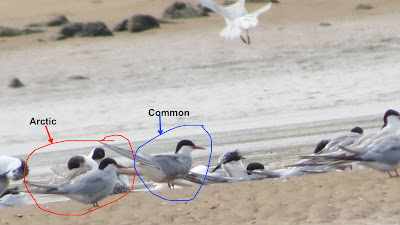 I thought that was my last addition to the list at the Snook (having dipped on a Golden Plover that someone else saw, and having unsatisfactory views of what was probably a Whimbrel flying through). It wasn't until I was looking through the photos on my camera the next day that I saw a picture (below) that I had taken of a juvenile tern with very obvious dark edges to some of the wing feathers. After checking the books and consulting with a friend who is a much better birder than me I came to the conclusion that it was a juvenile Roseate Tern - one of our rarest breeding birds (and the rarest breeding seabird) in the UK. Although I didn't identify it in the field, according to the precedent I set with the Jack Snipe back in February  (see Saltholme, Greatham Creek, Bellingham Beck and a couple of surprises at home afterwards), I am counting it on my Non-motorised Transport year list (#160). [EDIT - everyone makes mistakes and both me and my friend made one in this case - it was actually a juvenile Sandwich Tern (see below)]

The downside to examining the photos closely was that I realised that the golden blobs that I  saw amongst the Lapwings, Dunlins and Ringed Plovers at Greatham Creek on the way back home, weren't Golden Plovers as I had thought, and were in fact probably juvenile Dunlins. You win some you lose some.

However, I did add two more species to the list on the way home that really were what I thought they were - two lovely summer plumage Grey Plovers (showing why North Americans call them Black-bellied Plovers) which another birder showed me on Seal Sands, and a flock of 33 Barnacle Geese at Saltholme. Unlike the lone Barnacle Goose I saw on a farm pond earlier in the spring, I am counting these ones as there are part of a self-sustaining feral population breeding, probably in North Yorkshire.

As well as five new birds for the year list I saw several other species that I have not seen very many of this year including Spotted Redshank, Greenshank, Common Sandpiper and Great Egret and lots of other common birds.

The next day, Sunday was grey and drizzly for much of the day but news of a Brent Goose (a bird which has eluded me so far this year) at Greatham Creek, got me out out the house and north of the Tees for the second day running. Unfortunately there was no sign of our smallest goose by the time I got to my destination but I did hear the distinctive calls of two Whimbrels flying overhead (NMT #163162). Despite almost certainly seeing this twice the day before I had decided not to count them as I didn't think the views I had were good enough, so I was really glad to add this relative of the Curlew to the list. Like the Curlew, the Whimbrel has a long downward-curved bill, but unlike that species it has dark stripes on the head and in most of the UK is only ever seen on migration in spring and autumn.

One final bird that I'll give a 'shout out' to before finishing is the Black Swan that has been hanging round Saltholme, and associating with a Mute Swan, for quite some time now. This species is native to Australia and at any given time present in ones and twos in the UK, dotted around the country. They didn't find their way here naturally though and there is no self-sustaining population here so it doesn't count on the list. Nonetheless they are handsome birds, as this photo shows, and are worthy of a mention.