Cycle ride to the sea

Hi everyone. Sorry about the long gap between blog posts. I’m not sure why I haven’t been writing anything for the past couple of months - it’s probably because I just haven’t been out and about much. That definitely changed today when Sue and I went for a cycle ride to the coast at Redcar and back, coming a slightly longer way on the way home - we totalled about 35 km (nearly 22 miles).

It really felt like Spring  - we were serenaded by birds singing and many wildflowers were visible along the sides of the road.

The birds that we heard included Chiff-chaffs, with their metronome-like ‘chiff chaff’ song (from which they get their name), the musical songs of Robins, Blackbirds and Song Thrushes, Chaffinches sounding like a fast bowler taking a run up, the fast, frenetic song of the Wren (much louder than you might expect from such a small bird) and the ethereal, wistful warble of a distant Skylark, high up in the sky over a yellow field of Oilseed Rape. I thought we might hear our first Blackcaps of the year (flutey, melodious) but sadly it was not to be - just a little too early maybe.

After hitting the coast at Redcar we cycled south along the seafront to Marske and stopped for tea and biscuits on a bench where we could look down on the beach. Sanderlings like little white clockwork toys entertained us, while a small flock of Turnstones were more sedate. Just as we were about to leave, two immature Herring Gulls drew our attention to a distant Red-throated Diver (still in its winter plumage, so no red-throat today) which had caught a fish that they were trying to steal.

Early spring flowers were everywhere - white blossom of Blackthorn in the hedges, Apple and Cherry blossom in the gardens of the houses; creamy White Deadnettle with their hooded flowers and yellow cushions of Lesser Celandine flowers in patches of woodland, and the white fuzz of Danish Scurvy-grass along the big main road.

This last species (which, despite the name, is a member of the cabbage family, with tiny white, cross-shaped flowers, and not a grass at all) is a ‘halophyte’ (salt-loving species) which in Britain used to be found only on the coast. In the last forty-or-so years, however, it has spread inland, mostly along main roads. This is because the edges of large roads now are very salty as a result of gritting during winter (note for non-UK residents in case this doesn’t happen in your countries - when icy conditions are expected here, the local councils and highways authorities spread coarse salt, known as ‘grit’, on road surfaces to create a saline solution which has a lower freezing point than pure water). While preparing to write this blog-post I discovered something that makes me suspect that many people outside the UK (where we have pretty mild winters) will not be familiar with this practice. Below -4ºC (24.8ºF) salt becomes less effective and below -10ºC (14ºF) it is completely ineffective.

The first image below shows the botanical recording area of North-east Yorkshire. Each red square represents a 2x2km square, known as a tetrad, in which Danish Scurvy-grass has been recorded by botanists. The second image shows the same map with the approximate locations of the major urban areas marked on, as well as approximate routes of sections of two of the major roads (the A19 and the A64). The degree of correlation is quite marked. I could also have marked on other settlements such as Great Ayton, Guisborough and Staithes, and roads such as the A170 going west from Pickering. And this map only shows where the species has been recorded by skilled botanists, and only at a fairly coarse scale. I believe that if it were possible to show everywhere this plant really grows, at a fine scale (say 1x1m), I believe that the resulting map would be a very accurate outline of our road network. 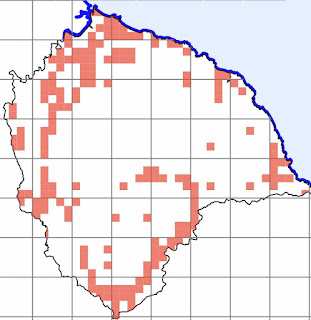 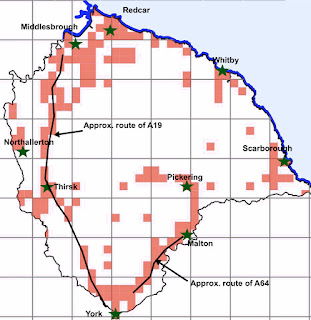