In my last blog I told you about the Grey Wagtail that visited my newly made garden pond (which used to be a bath). See The making of a pond and an unexpected visitor. He/she has been back at least twice since then.

In that blog I didn't put a picture of a Grey Wagtail but yesterday when visiting friends I saw a card they had got with a nice painting of a Grey Wagtail on it, and a little bit of information about the species on the back and I thought I should share it here. It's by an artist called Madeleine Floyd and I really like her style.

The bird in the picture is an adult male, with his black throat patch and completely yellow underparts. The one that came to our garden was an immature bird and so it lacked the black throat and only had yellow the very bottom of its belly and underneath the tail. It also had a lovely peachy wash on its throat and breast, with the rest of its underparts being off-white.

In case you find it hard to read the writing on the back of the card in the picture below, what it says is "Grey Wagtail (Motacilla cinerea)  - The largely resident and elegant Grey Wagtail owns the longest tail of the Wagtail family and has black and smoky grey upperparts with a sulphur yellow chest. This attractive palette contributes to an air of a gentleman. His call can be loud and sharp but his song is made up of chirruping flutey notes and fast trills and warbles. He is happiest living beside a mountain stream, enjoying the rocky terrain, but can make his home in other waterside locations as long as there is fresh running water nearby, from which he can catch water insects and mayflies to feast on" 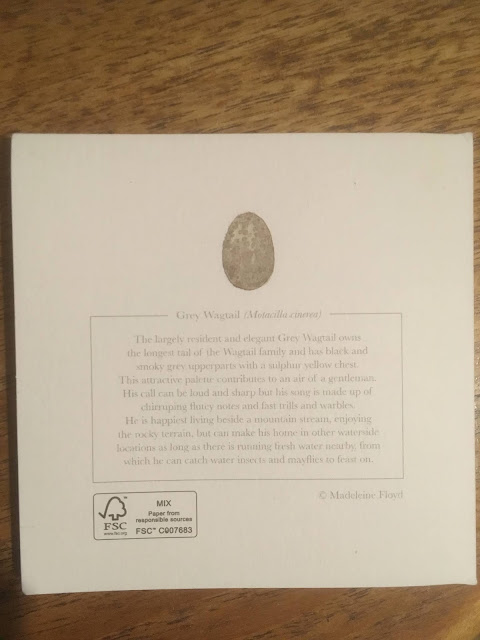 Posted by colintheconroy on Saturday, October 12, 2019 No comments:
Email ThisBlogThis!Share to TwitterShare to FacebookShare to Pinterest

The making of a pond and an unexpected visitor

Sue and I have just had a lovely, unexpected and very welcome visitor in our garden - a young Grey Wagtail, drawn in by our new pond, which we only made on Saturday (today is Tuesday). I would call that a success for our (still developing) wildlife garden .

The pond is actually a bit unusual (those who know me will be surprised by that not one little bit) - it is made from an old bath which had been fly-tipped in our back alleyway and which I asked for when the council were getting it cleared away. I have been gradually developing a ‘wild area’ in one corner of our garden over the past year and a half. When we moved in, the entire garden was covered in concrete, wooden decking and gravel on top of blue plastic sheeting and it has been quite a job turning it into a nice garden (we’re not finished yet). This latest stage involved digging a trench about 2 metres long, 1 metre wide, and slightly less than half a metre deep and putting the bath into it (having first purchased the right size of plug - 75p from one of our local hardware shops). The soil here, below the top 6 inches or so, is full of broken bits of brick and so I needed to use a pickaxe to loosen it before I could make any headway through it. Below that, luckily starting at about the depth I needed the trench to be, is a hard layer which appears to be very dense clay and it is this that the bath, aka my pond liner, is now resting. I used some of the soil I had dug out to fill in the gaps around the sides of the bath as much as possible.

Once the bath was in place I put some soil, gravel, rocks and all the broken brick I had dug out, inside it to give insects and plants something to burrow/ root into and also to allow any non-aquatic creatures to climb out easily. Then I filled it using water from our rain-water butt, using two watering cans. See the attached photos that Sue took at different stages of the process. The final result was a rather eccentric type of small pond with a little rocky island and no plants growing in it yet.

I was quite please with the end result but I wasn’t expecting it to attract any wildlife this soon after its creation. Add to that the fact that we have not had many birds of any sort in our garden over the summer, since we took most of the feeders down in the spring. I had only just put them back up again a few days before the creation of the pond and although I had seen evidence of birds visiting them (peck marks in the peanuts), I hadn’t actually seen anything on them until this afternoon. I looked out of our bedroom window (the best place to view the feeders) and saw, first two Collared Doves, then a bunch of House Sparrows on the ground and on the peanut feeder, and then I noticed something on the side of the new pond - a small bird, similar in size to the sparrows but with about half of its length taken up by a long tail, which it was constantly wagging up and down. A Grey Wagtail! Many of you will be familiar with Pied Wagtails - black, white and grey birds, common in towns and cities in the UK. Well, Grey Wagtails are similar in size and shape (with a slightly longer tail), but with a smooth grey back and varying amounts of yellow on the underparts. This particular one had bright yellow under its tailbase, and on its rump but the rest of its belly was whitish. Its throat and upper breast were a nice pale peachy buff colour, with no black patch, and it had a little pale line above each eye. This combination of features told me that it was an immature bird, hatched earlier this year. It is too early to be able to tell what sex it is, although next year, if it is a male, it will have a jet black throat and yellow from its throat to its tail.

Wagtails are closely related to pipits, and like them are fine-billed, insect-eating birds, but a generally much more colourful and interesting to look at than pipits, most of which are very similar looking streaky brown birds - the archetypal LBJs (Little Brown Jobs). There are three wagtail species which breed in Britain - the Pied Wagtail (which is actually the British and Irish race of the much more widespread White Wagtail), the Grey Wagtail, and the Yellow Wagtail. Many people, on seeing their first Grey Wagtail, mistake it for a Yellow. This is understandable, but Yellows are actually quite different - smaller, yellower and unlike Pieds and Greys, Yellow Wagtails are not here all the year round. Instead they migrate to Africa for the winter. They are also much scarcer than either of the other two species and are not usually found in towns, preferring instead wet grassland habitats and marshes.


Grey Wagtails like fast flowing upland streams, but also any kind of watery habitat, including urban canals and park lakes. When I was young I would have expected to have to go to a wild, hilly place to be able to see one - in fact I saw my first one in the hills of the Peak District in Derbyshire at the age of 16. I was very excited. Now, however, they can be found over most of lowland Britain, although you are still more likely to see one near a fast flowing stream than an urban garden pond/bath, and I admit that I was almost as excited to see my most recent Grey Wagtail as I was to see that first one, all those years ago.

I wasn't able to get a picture of today's bird, but click here to see some pictures and some more information about Grey Wagtails - Grey Wagtail Bird Facts - RSPB