A week full of beautiful plants and great people

From last Saturday until this morning, I was in the Yorkshire Dales, near the village of Malham, and the famous Malham Tarn, at the week-long Annual Summer Meeting of the Botanical Society of Britain and Ireland (or the ASM of the BSBI). About 46 very keen botanists ( of a range of skill-levels but including some of the best botanists in the country) gathered in what is one of the great botanical hot-spots of the British Isles. During the week we had trips to some really special habitats  where there are plants growing that are hard to see anywhere else. For the last few days we split into small groups to survey tetrads (2x2km squares) to identify all the wild plants we could find there for the up-coming new edition of the Atlas of British and Irish Flora which will be published next year.
Each day one of the participants was a guest blogger on the BSBI's "News & Views" blog, and on the Monday that was me.
Here is my post

And here are some of the photos I took that didn't make it onto the BSBI blog:

Posted by colintheconroy on Friday, July 19, 2019 No comments:
Email ThisBlogThis!Share to TwitterShare to FacebookShare to Pinterest

Another Twitch - White-winged Tern at Saltholme

On Friday afternoon last week I nipped across the river to the RSPB's lovely reserve at Saltholme where an adult, summer plumaged White-winged Tern (Chlidonias leucopterus) had been giving great views to lots of people for the past day and a half.

This is a bird that I have seen once before in the UK, and several times abroad but always in grotty juvenile plumage, when it looks very like two other closely-related species - the Black Tern (C. niger) and the Whiskered Tern (C. hybrida), so I was very keen to see it.

When I arrived there I was told by the staff (who assumed that that was what I had come for) that the bird was still flying around the main lake and was visible from the big window on the ground floor of the visitor centre (there may have been a better view from the cafe upstairs but that was just closing so I couldn't go in). After a few minutes scanning around, and with a little help from a lady who had already seen it but was trying to get a picture of it, I got a few frustratingly quick views in the binoculars but took a bit longer to get it in the telescope. It was NOT staying still and whenever I got onto it it would immediately change direction or dip out of sight behind one of the islands, and I'd lose it again. An additional frustration was that I was viewing it through a curved glass window and so it was pretty blurry when viewed at 20x magnification through my scope. It was a beautiful bird with a jet-black body, black and white wings and a pure white tail. It is a bit smaller than the Common Terns (Sterna hirundo) which nest in good numbers at Saltholme and which kept chasing it away whenever it tried to settle down on a post or on the ground.

After a few minutes I went outside to a place where, although slightly further away from the bird than I had been, I could see it clearly and have a chance of getting a picture of it. I was soon joined by another birder - a very friendly guy called Neil Martin who had come down from South Shields to see the bird. It was a lifer for him. Neil was a better photographer than me and, unlike me, was able to get several pictures of it. He very kindly agreed to let me put some of them on my blog (see below).

The White-winged Tern, known to most UK birders by its old name of White-winged Black Tern, is one of a small group of terns (the ones mentioned in the first paragraph) known as the marsh terns. This is because they are generally found in freshwater habitats rather than coastal ones like many of the other tern species. The marsh terns are smaller than most of the other terns, which are also in a different genus (Sterna), and usually feed on insects which they catch in flight or by picking them off the surface of the water. This is another difference between them and the Sterna terns which dive into the water to catch small fish. White-winged Terns are scarce visitors to the British Isles but are widespread across Africa, Asia and Australia. In Europe they a summer visitors only and are mostly restricted to Eastern European countries, such as Poland, Hungary, Ukraine and Russia.

This particular bird only stayed at Saltholme for two days before flying off somewhere else and not being seen again. 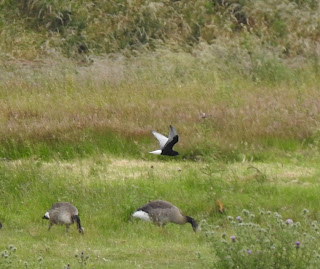 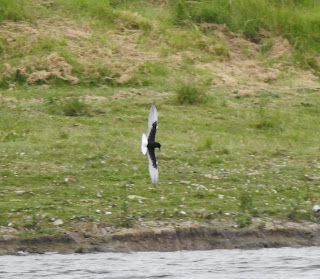 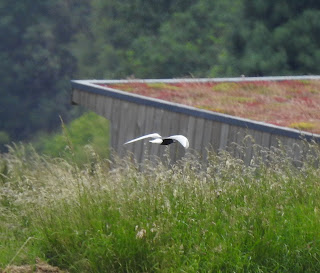