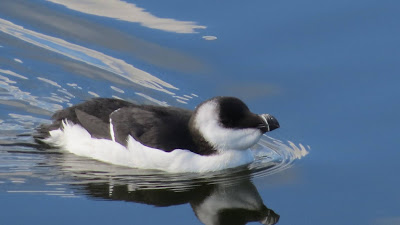 As it's been about a month and a half since I last wrote, and I've been on a lot of different trips and added seven birds to the NMT list, rather than write a blow-by-blow account of every birding trip I've been on, I'll just say something about each of the new birds, with a few other species thrown in occasionally when it seems appropriate.

When I last wrote, my Non-Motorised Transport bird list for 2021 stood at 162. If you remember it being 163, that is because, erm, I made a mistake and misidentified a young Sandwich Tern as a young Roseate Tern (resulting in a red face for me for a few days after it was pointed out to me). If you read that blog now you will see that I have amended it.

#163 Razorbill - 22nd of Aug. On a trip to South Gare I did a little bit of sea-watching at the end of the Gare. There were lots of Guillemots (hundreds) on the sea, a couple of Purple Sandpipers on the rocks (my first of the autumn), a single Common Scoter and another duck (that might have been a Scaup) flying north, and one or possibly two birds that I was pretty sure were juvenile Razorbills. With my confidence in my own ID skills slightly knocked having just been told a few minutes before about my tern mistake, I was doubting myself even after getting a photo which I would normally have been perfectly happy with. The bill doesn't have the white lines of the adults but it is still a different shape and the face is much 'messier' than that of a Guillemot (Common Murre for my North American readers). A month later there was a big (and very unusual) influx of Razorbills to inland locations including the River Tees at Stockton and Middlesbrough Dock where I was able to get some lovely pictures of an adult (see below). I wrote about this in an article on the website 'The Tees', which you can read here - Why did the Razorbill raise 'er bill?

#164 Black Tern - 12th Sept. Black Tern is one of three small terns known collectively as the 'marsh terns'. The other two (White-winged Tern and Whiskered Tern) are both rare in Britain and Ireland although both have been seen at Saltholme in the last few years (in fact I wrote about seeing one of them, in this blog, in 2019 - Another Twitch - White-winged Tern at Saltholme). Although Black Terns have bred occasionally in the UK, they are much more commonly seen on migration (in spring and autumn) between their wintering grounds in Africa and their breeding sites in freshwater marshes in Scandinavia and Finland. They are seen every year around Teesside but seeing them can be a bit hit and miss so I was very pleased when I heard that three were hanging around at Saltholme just after I got back from my holiday in the south of England. They were flying around feeding actively on the main lake in the reserve and were almost the first bird I saw after I arrived there.

#165 Curlew Sandpiper - 12th Sept. After watching the Black Terns for a while I went down to the Saltholme Pools Hide and after much searching managed to get a view of a juvenile Curlew Sandpiper which had been being reported there. Like the Black Tern, Curlew Sandpipers are passage migrants in the UK, but they travel a lot further - between the Arctic tundra in northern Siberia, where they breed in summer, to their winter areas in central and southern Africa. They are quite similar to the much more common Dunlin, but more slender and longer-legged with a (hard to see) white rump patch (between the tail and the lower back).

#166 Golden Plover - 12th Sept. While watching the Curlew Sandpiper I heard that some (European) Golden Plovers were on the causeway in the middle of the west pool but I couldn't get a good view so I went round to the other side to view them from the road and was able to get a few distant pictures. Although this species does breed on the North York Moors, not far from Middlesbrough (where I tried and failed to see it earlier in the year), it spends the winter in much larger numbers around the Tees estuary.

#167 Brent Goose - 25th Sept. Another trip to South Gare resulted in a couple more new birds for the list, with the first being 3 Brent Geese swimming along the shore at Bran Sands. This is our smallest UK goose and they are much more maritime than the other species that we get here. There are two subspecies found in Britain - the Pale-bellied and the Dark-bellied forms, with a third, the North American subspecies (known as Black Brant) being an occasional visitor to these shores. Both the Dark- and Pale-bellied forms can be seen in this area occasionally, with these ones being Pale-bellied

#168 Red-throated Diver 25th Sept. Another short sea-watch from the end of the Gare yielded (among other things), a brief view of a single Red-throated Diver (unfortunately too brief and distant to get a photo). This may have been the same one that has subsequently been photographed several times just along the coastline in Redcar, but which, sadly can be seen on the pictures to have a scrap of fishing net tangled round its head and in its bill.

#169 Little Stint 3rd October. After several failed attempts to see a Little Stint this year (including three trips to Redcar Beach for a bird that had been seen there), two days ago at Dorman's Pool (part of the Saltholme complex of pools) I finally got several quick views of one that has been moving around that area. The light was lovely and Dorman's was full of birds that evening, with large numbers of Wigeon, Lapwing, various species of gulls, several Dunlin, at least 8 Ruff (both male and female, showing the marked size difference between the two sexes of that species) and 1 juvenile Black-tailed Godwit. It was really enjoyable sitting there in the hide sifting through all the birds, taking pleasure from the common ones but also looking for anything unusual. The Little Stint kept appearing and disappearing but I managed to get a few poor shots, of which this was the best. You can at least see the short bill, and one of the white lines on the back ('braces') which show it to be a juvenile.

Posted by colintheconroy on Tuesday, October 05, 2021
Email ThisBlogThis!Share to TwitterShare to FacebookShare to Pinterest