New species for my NMT list after a long break

Until yesterday it had been over a month since I last added any birds to my Non-motorised transport year list, despite several trips where I had thought I was certain to get some new species. However, last week the news was released that a pair of Mediterranean Gulls (known to birders as Med Gulls) had nested among the Black-headed Gulls and Common Terns at Saltholme RSPB reserve, and were feeding two well-grown chicks on an island just in front of one of the hides. Then on Friday a Caspian Tern (a really rare bird which would be a British 'tick' for me as well as a new NMT bird) appeared at Saltholme and kept coming back to the same place over the next couple of days.
I was unable to go birding on Friday and Saturday but Sunday was free so I planned a trip to Saltholme for that day, with the hope that I would get both species, plus maybe a few of the others that are still missing from my list.
I left the house later than planned on Sunday morning and by the time I was getting near Saltholme the tern hadn't been seen for several hours so I went straight to the hide where the Med Gulls were. Immediately after I walked in the two birders that were already there suddenly started looking at a bird in the air, and snapping off pictures of it, so I raised my 'bins' and there was a lovely Mediterranean Gull - NMT #155. It was one of the parents (the chicks were still unable to fly) but, surprisingly, it wasn't a full adult. Instead of pure white flight feathers it had some black streaks on them, indicating that it was a 'second-summer' (or sub-adult) bird. Med Gulls don't reach full adult plumage until their third year, unlike the similar and slightly smaller Black-headed Gull (very common in the UK) which do it in two (larger gulls like Herring Gulls take 4 years). I rushed back to my bike (outside the hide) to get my camera but by the time I got back it had gone. Despite waiting for about 45 minutes it didn't come back, although I did get a quick glimpse of the two chicks before they vanished into the vegetation on the island.
I decided to go down to the Saltholme Pools Hide to see if the Caspian Tern was visible again and to see what else was around. Just before I had set off from home a group of six Ruddy Shelducks had been found in the same area that the tern had been frequenting so I was hoping to see them. Ruddy Shelduck is one of those tricky species that can be countable or not countable depending on the origins of the individual birds you see. As a native species they only just reach the very east of Europe and are unlikely to turn up naturally in the UK from these 'truly wild' populations. It is commonly kept in captivity and many solitary birds seen in the wild here are probably ones that have escaped from collections. However, there are some self-sustaining feral populations in different western European countries, which show some tendency to move around in the summer, so a group of six showing up at Saltholme at the end of July seems more likely to be from a feral breeding population (and therefore 'tickable') than to be birds which have escaped themselves from captivity (which wouldn't be). However, there was no sign of either Caspian Tern or Ruddy Shelducks so after a while I went back to the other hide to try and get some pictures of the Med Gulls.
When I walked into the hide I saw straight away that one of the Med Gull parents was there on the ground with the two chicks. It was the other parent this time, a full adult, with pure white wing tips and I was able to get lots of pictures of all three birds for the next twenty minutes or so. Mediterranean Gulls are quite similar looking to Black-headed Gulls but the adults and sub-adults have larger, redder bills and darker heads (properly black, unlike Black-headeds, which are really brown on the head). This one was starting to lose some of the black on the head, indicating that it is moulting into its winter plumage. I have never seen Med Gull chicks before so it was interesting to see that they look (to my eye) more like miniature Herring Gull chicks than like slightly larger Black-headed Gull chicks as you might expect. 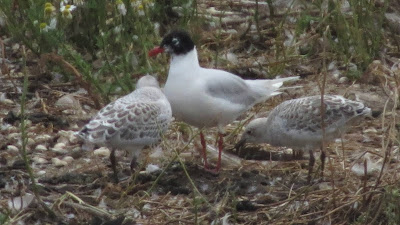 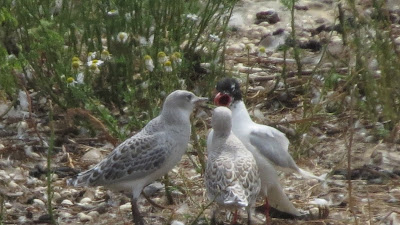 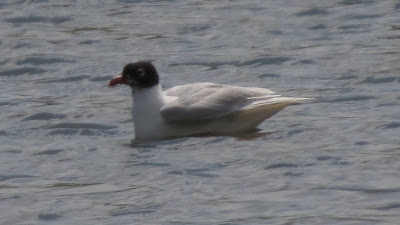 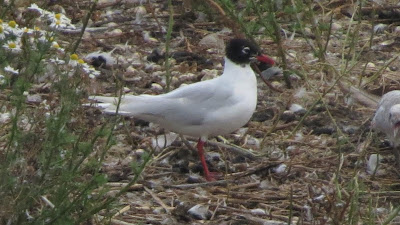 When I had had my fill of watching the Med Gulls (and the Common Terns, Canada Geese and the opportunistic and predatory Lesser Black-backed Gull hoping for an easy meal in the form of a Common Tern chick), I moved on to the Wildlife Watchpoint where the was a Little Grebe with a cute baby, and then the Phil Stead hide where I had my lunch and watched a Grey Heron and a Little Egret fishing for their lunches.
As there had still been no reports of the Caspian Tern by the time I finished my lunch I cycled up the Seaton Carew Road to Cowpen Marsh, Greatham Creek and Seal Sands to see what I could find up there. What I found was a nice Great Egret with the Littles on Cowpen Marsh, Grey and Harbour Seals on Greatham Creek and a few Dunlins, Redshanks, Avocets and other waders scattered around the area. 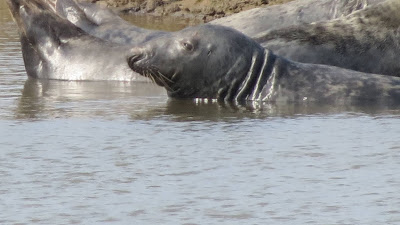 When I had exhausted the possibilities of the Seal Sands area I checked Twitter on my phone and saw that the Caspian Tern had just been found again at its 'usual' spot at Saltholme, viewable from the road, so I raced back to join the small group of birders which was gathered there. There was quite a heat haze and I was struggling to find it in my telescope (with a monopod instead of a tripod) so one of the other people let me look through her scope. There it was - the world's largest tern, with its massive red bill, and behind it, on the other side of the lake, were two of the six Ruddy Shelducks. NMT #156 and 157 in the same scope view.
The Caspian Tern, which is not much smaller than a Herring Gull, and much larger than all the other terns you are likely to see in the UK, is found in five continents (it doesn't reach South America or Antarctica) and I have seen it in three of them. In Europe it is usually restricted to a few scattered areas in different parts of the continent and in the UK it is a fairly rare bird with about five being seen in most years. The photos below are a bit blurry because of the heat haze but you can see the large red bill and get an impression of a large bird, next to the Black-headed Gulls it was sitting with. 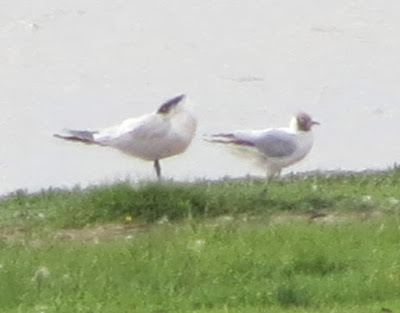 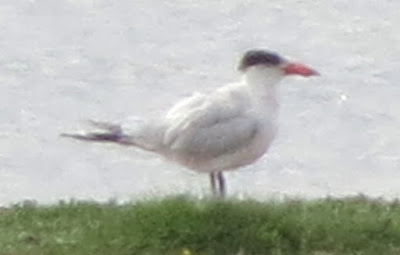 Posted by colintheconroy on Monday, July 26, 2021
Email ThisBlogThis!Share to TwitterShare to FacebookShare to Pinterest