In my last blog I talked about nature growing through the cracks in an urban street (Finding a Rare Plant). Today I'm going to tell you about a different sort of crack in our modern built environment where nature is continuing to thrive, but on a somewhat larger scale.

A few days ago another ecologist told me about a bit of grassland that he had just discovered, between the two sides of a dual carriageway not far from Middlesbrough, which had four species of wild orchids along with lots of other interesting plants. This morning I decided to pay it a visit. It wasn't very easy to get to, as it's effectively the central reservation of a large A-road taking traffic towards Redcar and Saltburn from the west, but I was able to do it legally and without causing an accident. 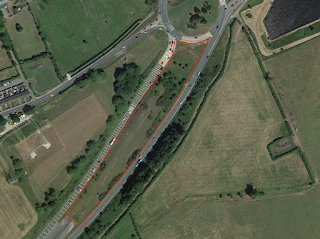 It's about 340 metres long and less than 50 metres wide at its widest point but it is beautiful and it is very easy to forget that you are in the middle of a major road. I don't know if it has survived by accident or has been deliberately left, but whatever the case is, I am very happy it has been left.
In a couple of hours I identified 56 plant species (not including trees which I didn't look too closely at, as I was more interested in the grassland species today) including the four orchids that my friend told me about:- Lots of Common Spotted and Pyramidal Orchids, plus smaller numbers of Northern Marsh Orchids and Bee Orchids. There was a lot of a very pretty little star-shaped white flower called Fairy Flax (its less pretty-sounding alternative name, Purging Flax is reflected in its scientific name Linum catharticum). Although I called it grassland - and that is the correct name for it - in the main part of the area there is not actually that much grass growing. However, those grasses that you can see are pretty interesting, such as Quaking Grass (Briza media), with its delicate flower heads made up of lots of little 'rice-crispy-like' florets which shake in the slightest breeze (which is why I wasn't able to get a good picture of it).

The sedges - grass-like plants in the family Cyperaceae - are one of my favourite groups of plants and I was very pleased to find, as well as scattered plants of the common Glaucous Sedge (Carex flacca), a large patch of the less commonly seen Hairy Sedge (Carex hirta), which I haven't seen for quite a few years. It is unusual for a sedge in having hairy leaves (on both sides) and hairy fruits as well.

There were also a few birds there today, including a Whitethroat - a migratory warbler which I think was nesting close to where I found the Hairy Sedge.